Everything You Need to Know About the United States Citizenship, Explained

What does it entail to be an American citizen? Citizenship has many advantages, but obtaining one is more difficult than you may imagine. It is defined as either having been born in the United States or having obtained citizenship via naturalization, according to the United States Citizenship and Immigration Services (USCIS). 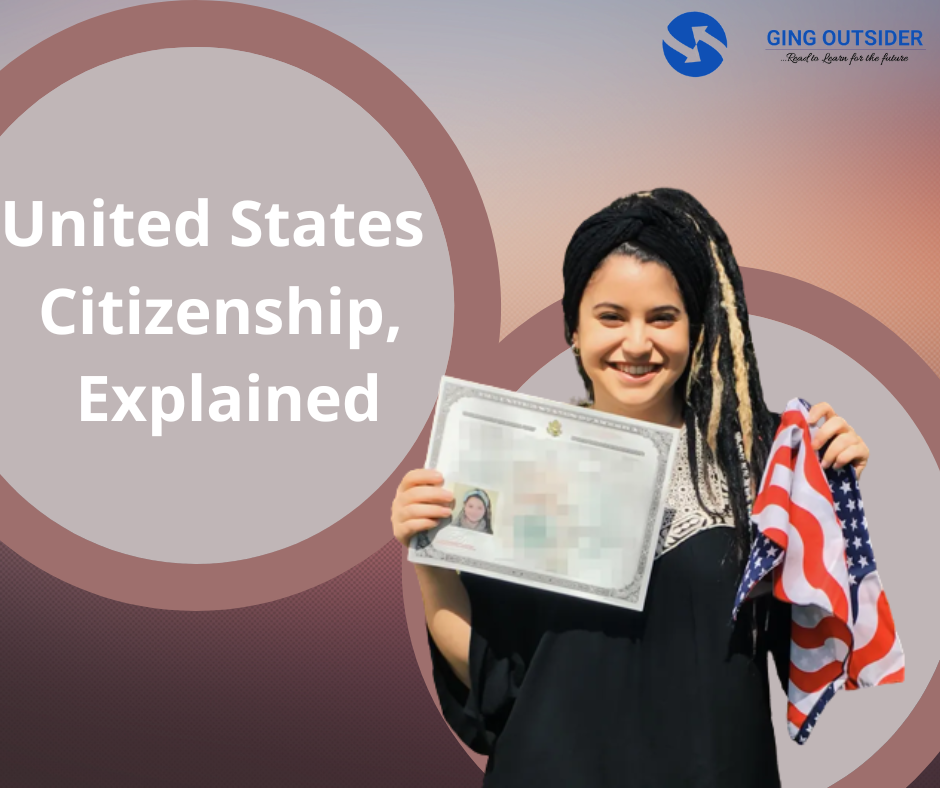 Meanwhile, there are two primary routes to citizenship in the US. You are most likely an American citizen if you were born in the country or immigrated when you were a little child; this process is known as jus soli and was created by the 14th Amendment to the U.S. Constitution. Jus sanguinis, or citizenship by bloodline, applies to people who have acquired citizenship through their parents or ancestors, regardless of whether they have ever visited the United States.

Furthermore, this guide to American citizenship explains all the additional crucial information. If you were born in the United States but aren’t yet qualified to become a citizen, make sure you read this page before making any decisions that might have a substantial impact on your life, whether you want to apply soon or simply want to know what you’re getting into.

Citizens of the United States have certain obligations, rights, protections, and privileges inside the country. Citizenship in the United States is the basis for fundamental liberties guaranteed by the nation’s laws and constitution, including the freedom of speech, the right to vote, the ability to live and work in the country, and the ability to receive government aid.

Is it Different From Having a Green Card?

Once they have been legitimately admitted into that program, everyone who is a permanent resident of the US is eligible to petition for US citizenship. To gain US citizenship, candidates must fulfill a number of conditions; it is not automatic approval. After submitting Form N-400 and paying all necessary fees, permanent residents who are qualified for US citizenship will receive a certificate of naturalization by mail. Depending on your circumstances, the procedure might take longer than 6 to 12 months on average. You get full citizenship after receiving your certificate of naturalization.

When it comes to leaving the nation, people with green cards and citizens have certain peculiarities. Those who hold green cards, for instance, must wait at least three years before they can leave the country without first obtaining permission from USCIS, whereas citizens have greater flexibility when traveling abroad because they do not require prior approval from USCIS before departing and returning to their home country.

Check Also: Working in the United States While Waiting for Your Green Card Approval

How Can I Become a U.S. Citizen?

You may become a citizen of the United States in a number of ways; you simply need to learn more about them all and choose the one that’s right for you. People that immigrate to the United States from all over the world hope to realize their American dream and establish a life there. As long as they meet the requirements based on the route they take to become citizens, everyone who wants to live the American dream has the opportunity to do so.

Most frequently, immigrants obtain a Green Card to become legitimate permanent residents before starting their lives in the United States. However, obtaining a Green Card is not the only route to proud US citizenship. You will have many more rights as a citizen of the United States than as a holder of a Green Card, as well as numerous advantages.

Each citizenship pathway has its own set of unique criteria, making the application procedure for US citizenship difficult. Understanding each of the possible avenues and how to apply them can help you realize your goal of becoming a citizen of the United States.

Naturalization is the procedure through which a person who was not born in the country voluntarily acquires U.S. citizenship. The most typical route for foreign nationals to acquire US citizenship is through naturalization. However, they may still be qualified for alternative routes. A person cannot apply for citizenship until they have satisfied a number of conditions. Generally speaking, having a green card or being a permanent resident of the United States is necessary to be eligible to apply for naturalization. To qualify for naturalization, you must have possessed legal permanent resident status in the US for at least five years.

If you are married to a US citizen, you may become a citizen of the US. You could be qualified to apply for a Green Card if you are married to a citizen of the United States. You’ll need to fill out Form I-130, Alien Relative Petition, from your spouse. You may apply for your green card using this form. The bond between you and your spouse is established. But before you can get that green card, there are several things you’ll need to verify. In essence, you must produce documentation, such as your marriage certificate, to show that your connection is real. You can apply for naturalization as a US citizen once you have a Green Card. However, there is a ton of paperwork involved in petitioning a relative for a green card.

Additionally, you can become a citizen of the United States based on your parents’ status. Even if you were born abroad, you are immediately entitled to U.S. citizenship by birth if both of your parents were born here and are still alive. As long as your parents are still together, this is valid. Though they are, you are still eligible to apply for citizenship even if you were not born here. However, previous to the child’s birth, at least one of the parents had to have resided in the United States. Additionally, if a parent naturalizes, any children who are under 18 and are living with them at the time may immediately “derive” U.S. citizenship if they are also permanent residents.

Foreign nationals can also become citizens of the United States through naturalization if they have rendered honorable service in the armed services. But if you want to do it this way, there are several conditions you need to satisfy. Depending on whether you served at a time of peace or hostilities, the requirements may vary. The requirements are as follows:

United States Citizenship: How to Apply

Your path to citizenship will begin with your immigration to the US because you were not born to parents who were citizens of the country. Prior to being eligible to apply to become a citizen of the United States, you must first get the status of LPR (lawful permanent resident of the United States). Having a Green Card is another term for having the LPR status. In the meanwhile, there are numerous methods to enter the country legally and receive a Green Card. These are what they are:

2. Live in the United States for Five Years

You must also have physically resided in the United States for at least half of the time that you have had LPR status. Either 30 months (2.5 years out of 5) or 18 months, then (1.5 years out of three). Additionally, you need to have spent at least 90 days living in the state from which you are asking for citizenship.

In the five years before filing and up to admission, or in the case of a spouse, the three years prior to filing and up until admission, you must have been of high moral character. It indicates that you did not lie during your naturalization interview and that you did not have certain sorts of offenses on your record at any time before filing, including murder, illicit gambling, and purposefully lying to the U.S. government in order to get immigration advantages. However, the government evaluates each application individually to see if it satisfies this criterion.

5. Willing to Defend the U.S. Constitution and Serve in the U.S. Military

The United States Constitution must also be accepted, and you must be prepared to serve in the military or in civilian capacities for the country if necessary. If you are a guy who was physically present in the country between the ages of 18 and 25 and registered with the Selective Service System, you must do so.

The Application for Naturalization (Form N-400) must be submitted together with the required filing fee in order to start the citizenship process. You have two options for submitting your application: online or on paper. Create an online account with U.S. Citizenship and Naturalization Services before filing electronically (USCIS). The following step is to schedule your biometrics appointment at the USCIS field office closest to you.

Your oral and written English proficiency will be assessed in the first part, which is an English language test. The second exam will assess your familiarity with American history and fundamental concepts of how the American government functions. The USCIS official will accept your application following the interview if you pass the exam and interview. But occasionally, USCIS could request further supporting documents from you or arrange for a second interview.

Read Also: How to Become a US Citizen Through Naturalization

Following the approval of your application, you will take part in an Oath of Allegiance ceremony. A public oath of allegiance to the United States must be taken. It’s crucial that you finish this process. You are not a U.S. citizen until you have taken the Oath of Allegiance. After your citizenship interview, you’ll receive a notice in the mail with the date, time, and location of the ceremony.

States have different scheduling requirements for the event. However, the procedure typically takes a year, and each year more than 700,000 candidates are naturalized. When you check-in, you will be required to return your green card. Following the ceremony, you’ll be granted a Certificate of Naturalization and can start living as a citizen of the United States. You can apply for an American passport once you have received your citizenship certificate. Due to American policy, it is possible to hold dual citizenship and yet be considered an American citizen.

It can be exceedingly difficult to navigate the United States Citizenship and Immigration Services (USCIS) and its programs. You must demonstrate your ability to adhere to a number of severe standards when you seek citizenship. Otherwise, your application risks being denied. Your application might simply be returned to the beginning if you make one mistake. Whichever of the four paths to citizenship you choose will be expensive and time-consuming.